I completed the basic build of my first unit of Kabalite Trueborn this evening.

One of the blasters is just a crude conversion of a dark lance (mini is kind of hidden in the shot above). I just snipped the lance barrel off and drilled the tip to make it look like a blunderbuss. It'll do given the cost of buying blaster parts off the bitz barns and what have you.

More on this squad at a later date.

Today I thought I'd add a tutorial to show how I achieved the rusted/pitted armour effect on my Dark Eldar Talos.


I've used the tail gun(s) to demo the technique.


I have signed up for the August monthly vow over at The Dark City and my pledge is to complete my Talos which has been hanging around for a very long time. I'll add to this post as I make progress on the model. 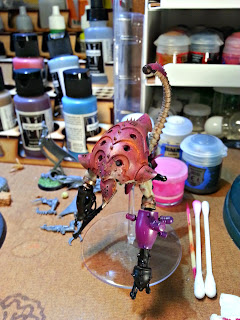 I originally (2014) started painting this model in my Kabal colours prior deciding on the Coven scheme. On top of that I really wasn't happy with the colour mismatch on the weapon plates so I made the decision to repaint.

So, first step, cover the magenta armour in Vallejo Model Air Rust. This gave a brown base that covered the magenta quite well.

I then dabbed thinned out Ushabti Bone on all of the armour plating using sea sponge. Over this a wash of very thin Abaddon Black. I alternated between wiping it on very thinly to dabbing (stippling) with the sponge.

Finally I built up to a mix of Ushabti Bone and Pallid Wych flesh. I made sure to leave streaks of the underlying colour visible though to make it look weathered.


After I had the armour colour in a good place, I used Vallejo Game Color Charred Brown to introduce a chipping effect on the armour. I was going for gritty, dirty and rusty and this is what I ended up with... 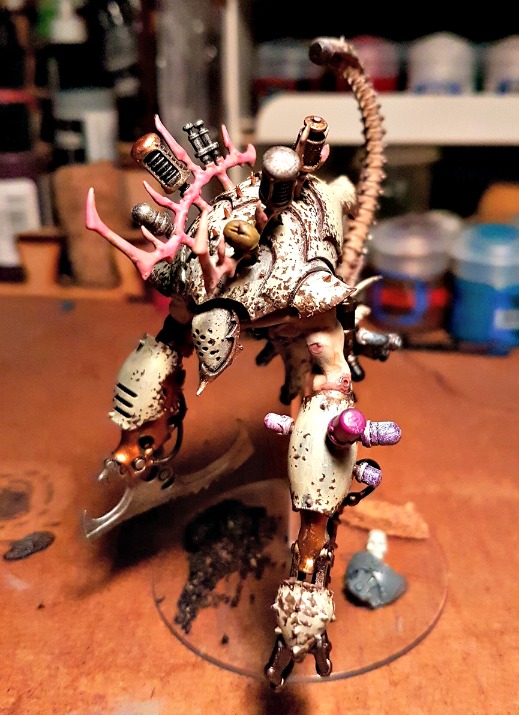 For a starting point, I must say I was pretty happy with it.

I decided to work on individual sections of the Talos and assemble them as they neared completion. The base/tail was my starting point, after which I added the torso, carapace and face mask.

I had magnetised the model when I built it so adding and removing the weapons is a breeze.

As of 3rd August, I'm close to completing this section. The flesh is complete, and the armour is ready for the final wash of AK Interactive light rust. I have applied a gloss varnish to the armour plates in preparation for that step. The last big job to do on this section are all of the vials and tubes. I'll be using my day glow pigments for those (at the moment I have a very rough base colour on them as you can see here). 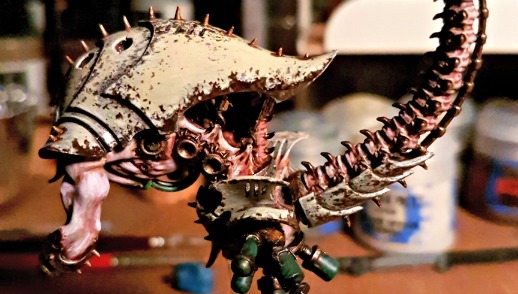 Here's a close up of the completed flesh and armour plates

So, the nearly completed torso/tail section now looks like this... 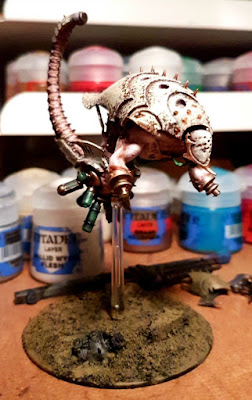 And yes, I've also started the base as well!

Lots of time over the last few days has gone into: 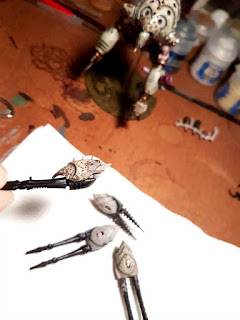 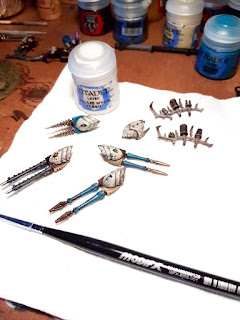 For the record, this model is bloody fiddly and time consuming! 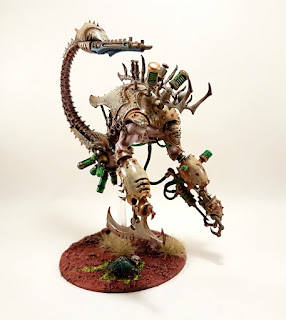 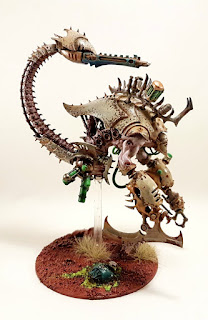 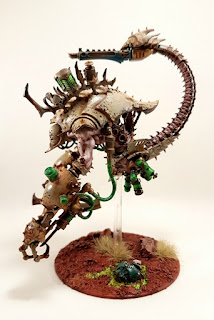 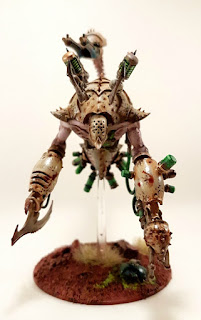 After a long break, I've dusted off the paint pots and brushes and finally finished my first unit of Wracks. 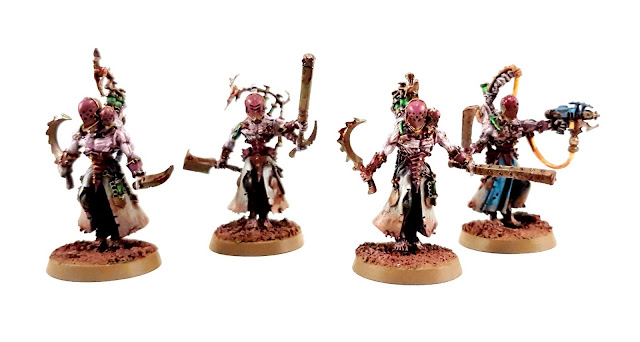 Photos taken with my new phone + light box. Not perfect but improving.

Next on the list of projects, finishing Kabalites and Wyches.
Posted by Unknown at 14:41 No comments:

Here is a rough colour test for my new Wych cult colour scheme. It's an incomplete messy paint job but I wanted to test out a new idea I had to add some variety to my army. 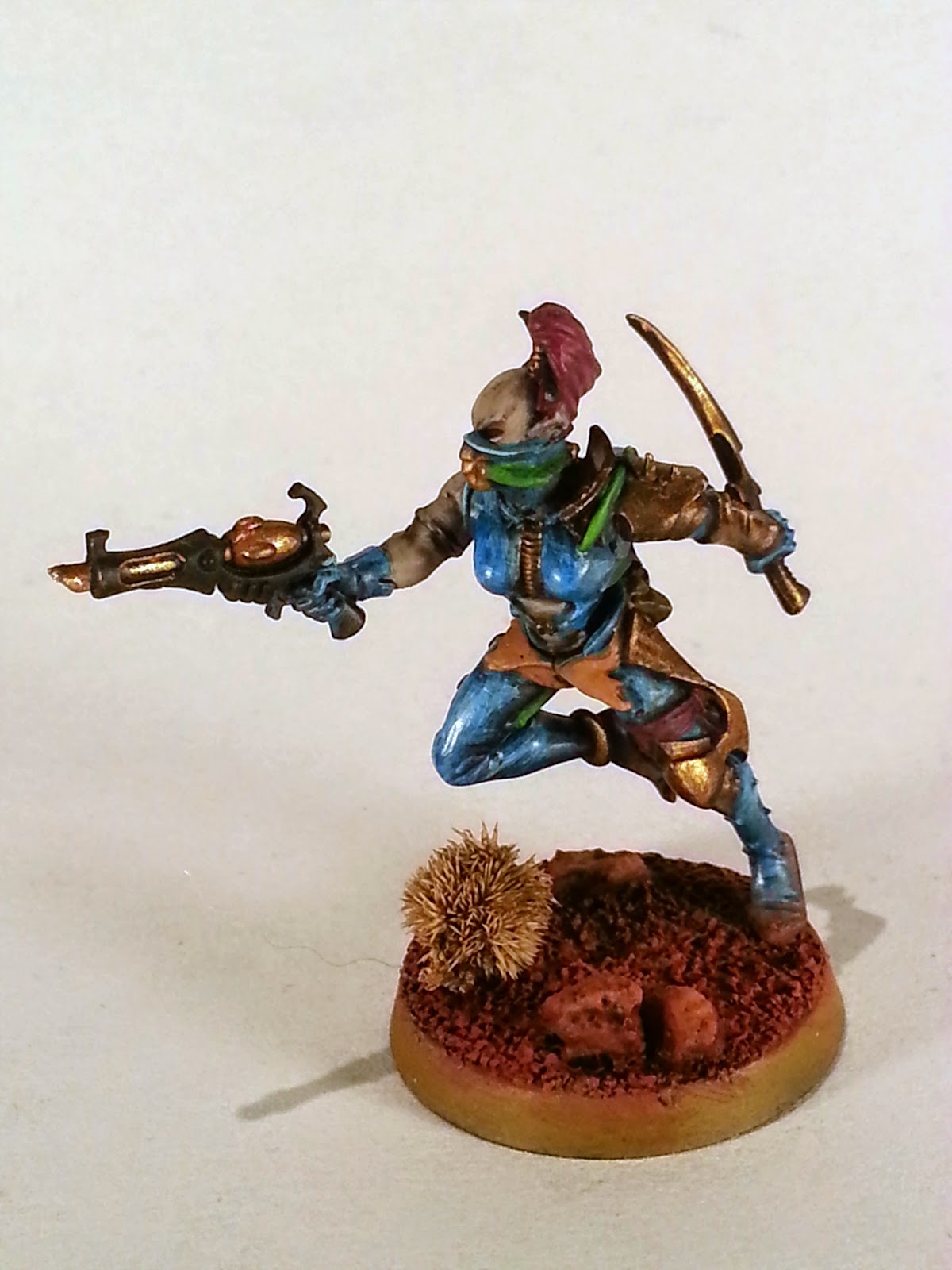 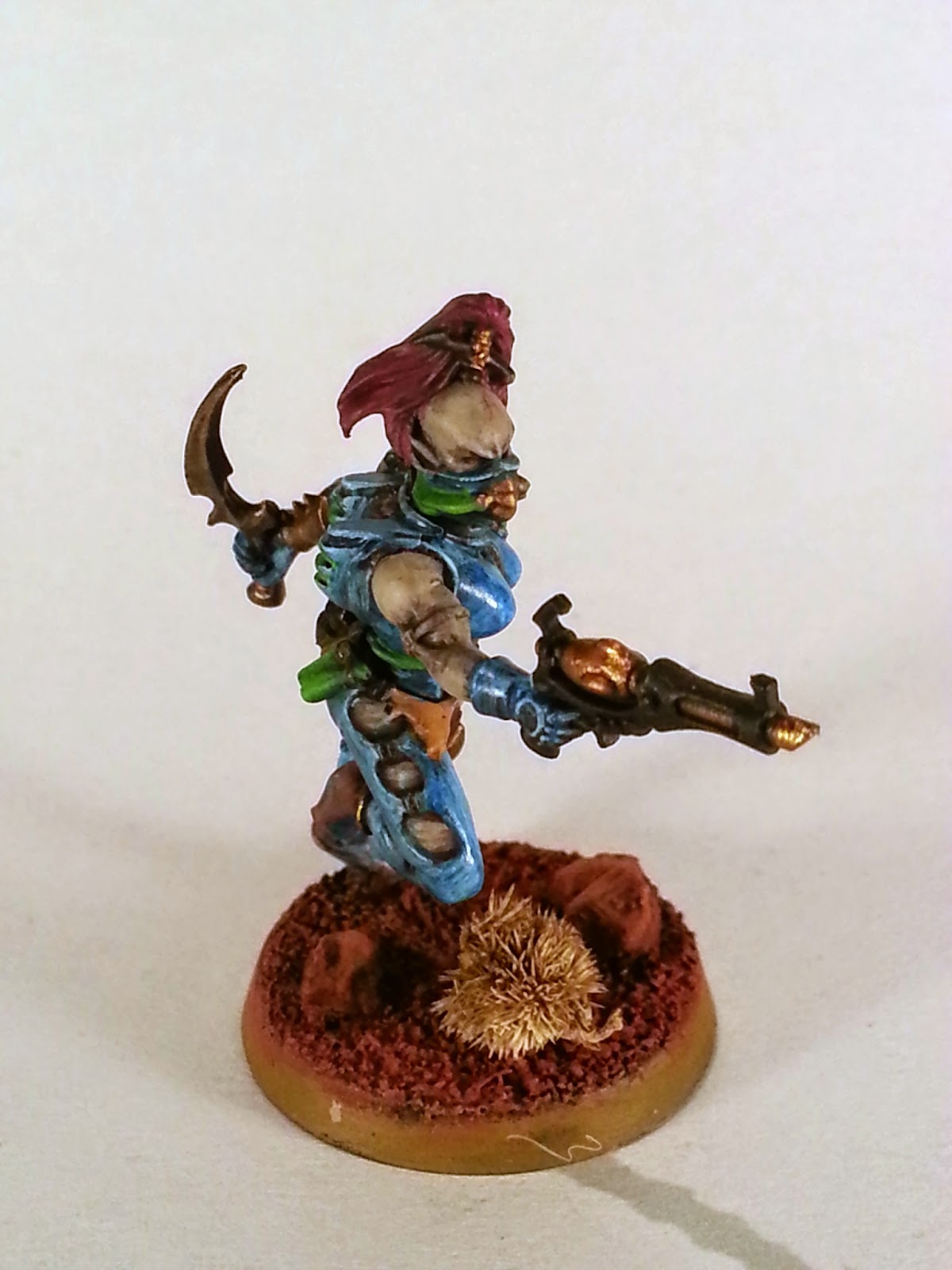 Big change from the original colour scheme (see wyches from my previous post) but I wanted to play to the Dark Eldar back story and have clear differences between the Kabalite, Cult and Coven elements of my army. That said, by using variations of the same three colours, the different factions should blend in together on the table to provide a common look and feel.

The three distinct schemes for the various elements of my Dark Eldar are:

Here's a shot of the palette for the wyches showing the colour steps. 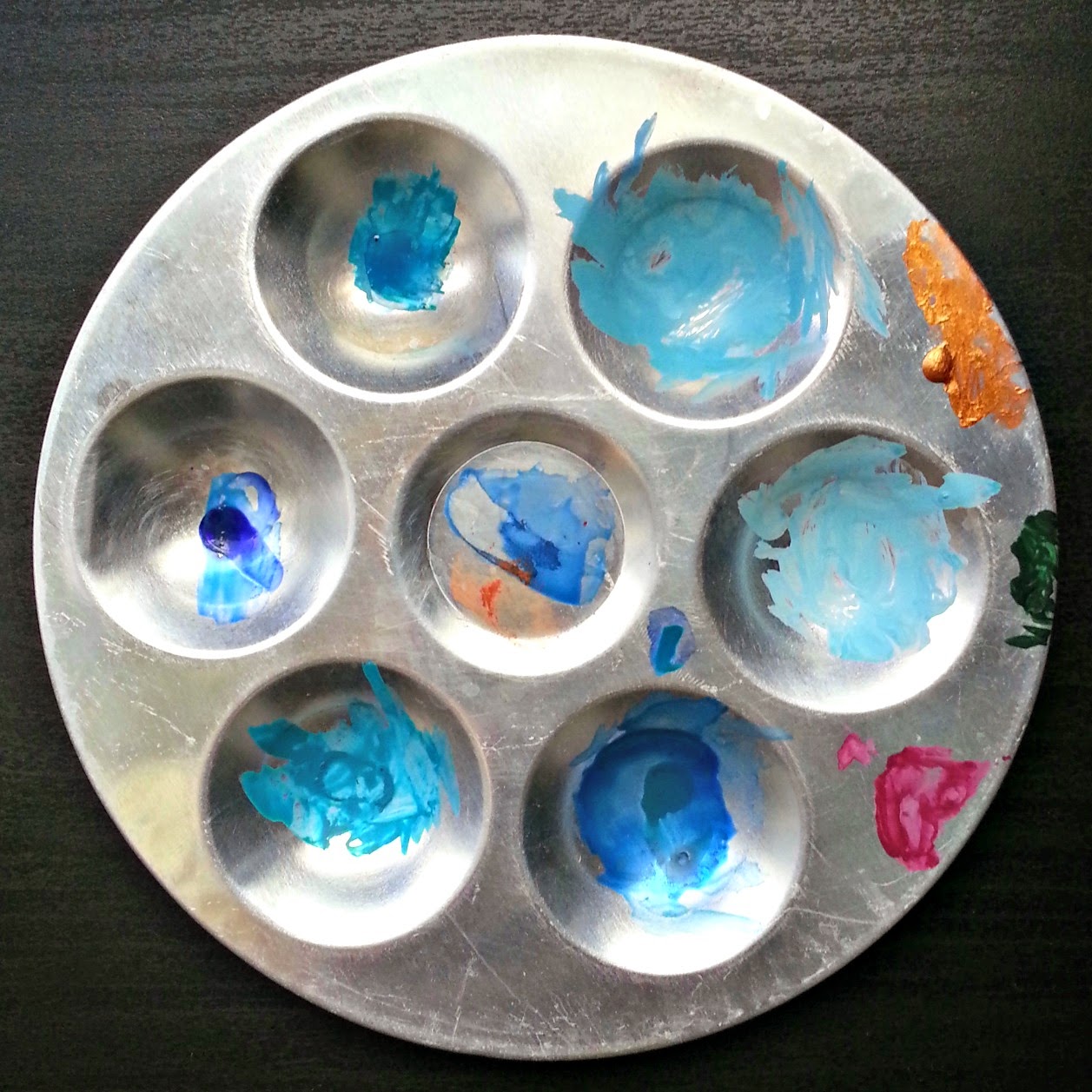 Something else I'm happy with is the new colour for my bases. I've changed from a generic "dirt" to a "red center" outback kind of look. I wanted something to differentiate my models and what better way than incorporating a classic part of Australia into the look and feel. It's a great colour that really pops and is easy to theme. 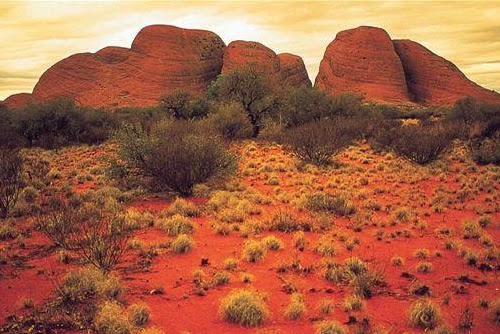 With my decision made on the Wych cult colour scheme I can now move on to planning the execution of my Reavers and Razorwing which (wych?) are pretty close to painting stage. 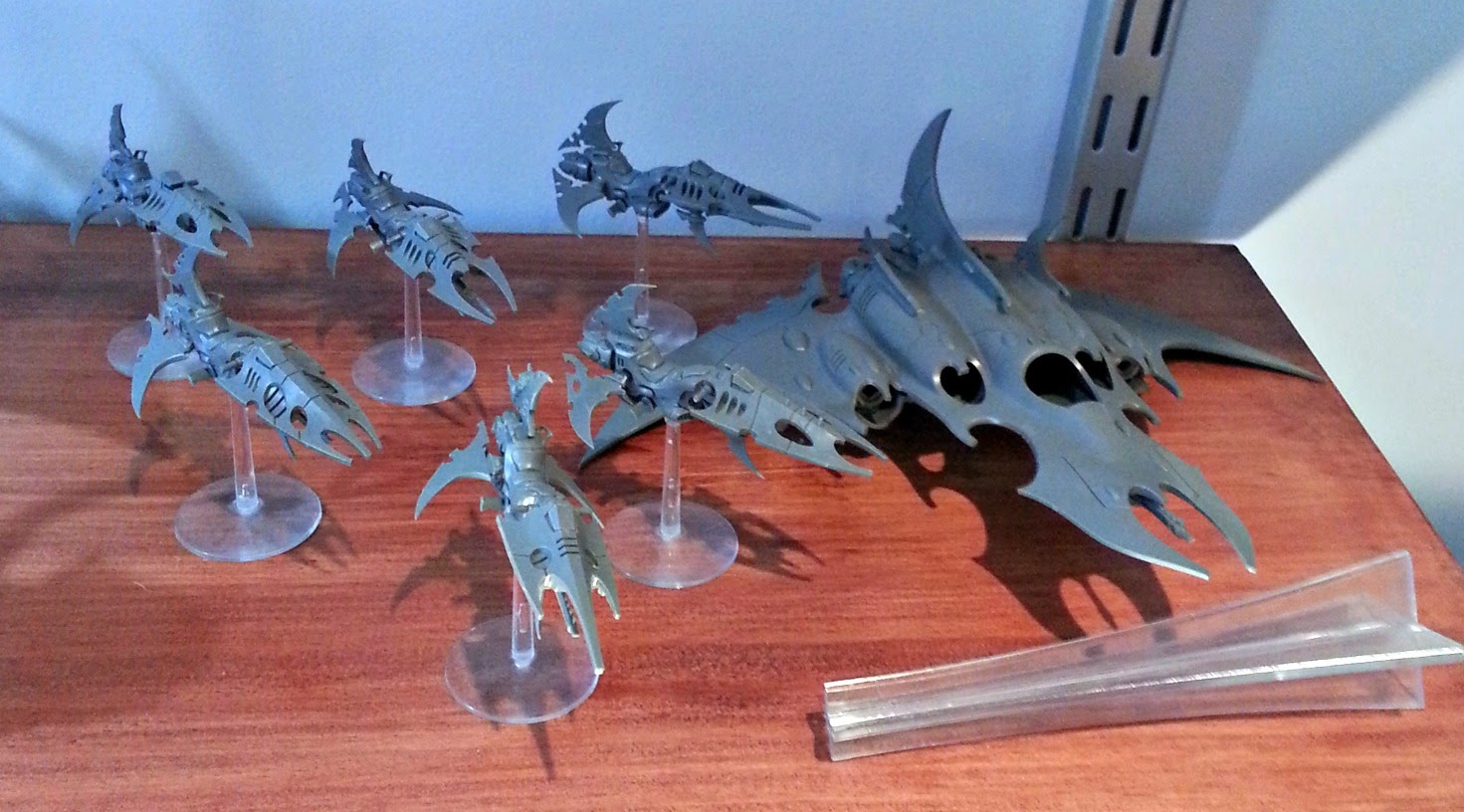 Other items on my desk (below) from left to right: Raider crew, Talos parts, Razorwing parts, Razorwing base (and just behind it are some bits I'm going to build into the base), Wych colour test model to tidy up and finish and lastly a Haemonculus. Lot's of projects on the go! 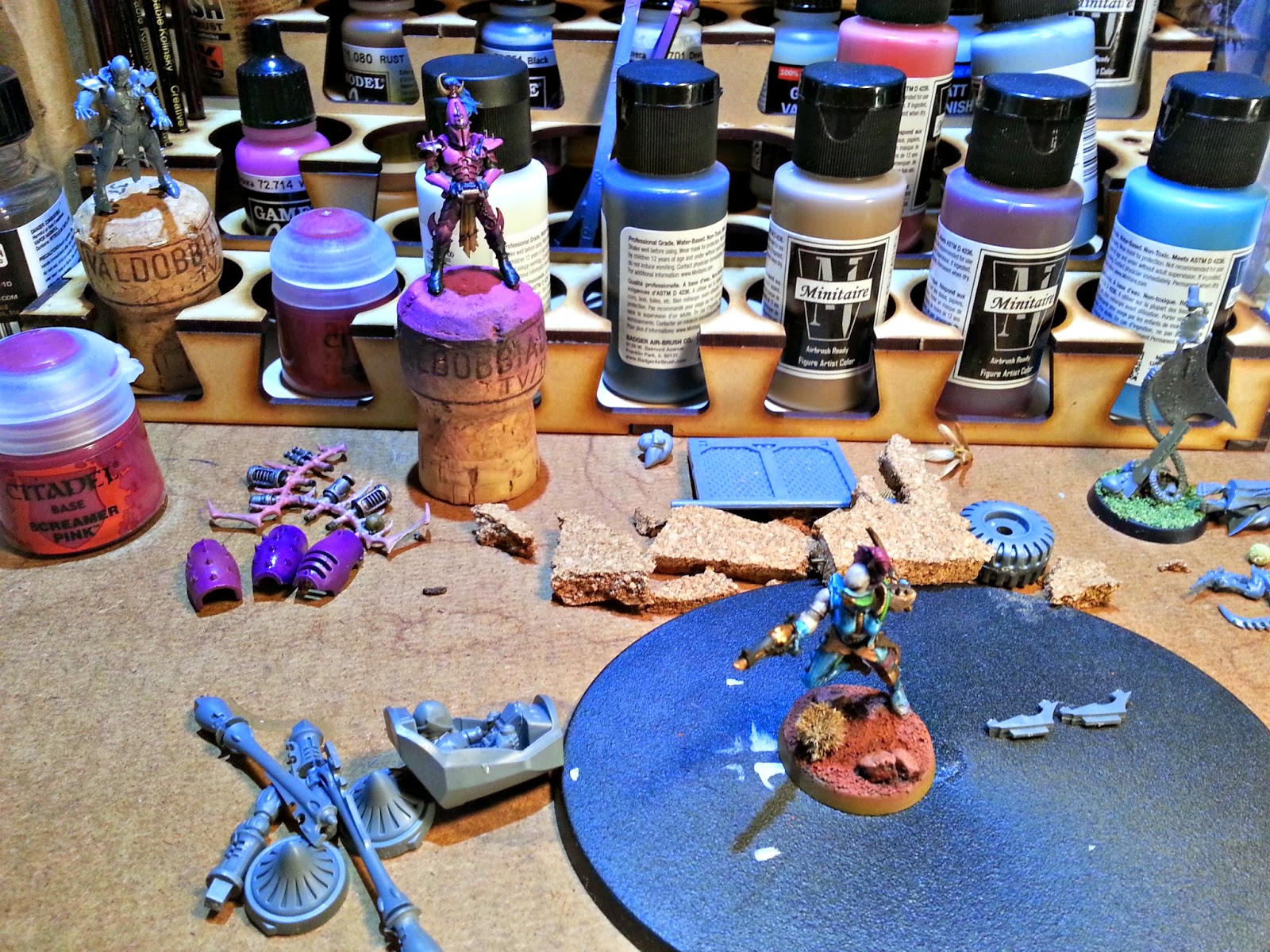 To finish off, here's a WIP shot of my Talos. The carapace and mask show the "dirty/rusted" feel I'm going for. I made a mistake and airbrushed the armour on the arm the same as my kabalites... I'll need to rescue this somehow to make the model look uniform. More on that another time! 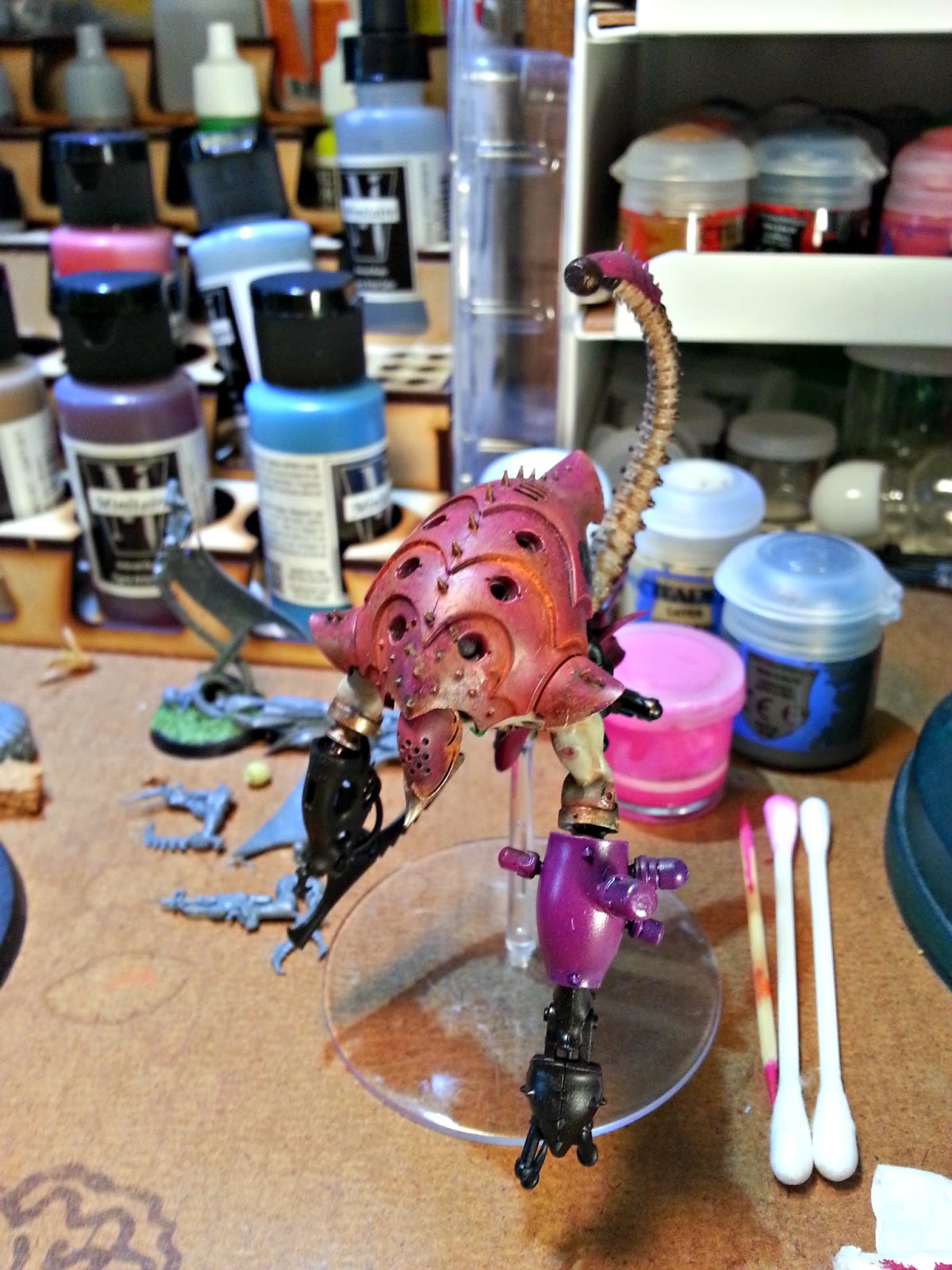 Cheers and be excellent to each other!

My first outing with the new airbrush on a model. Definitely has potential, but some improvement needed! Need a way of toning down the "pink" - just a little too bright for my tastes.
Posted by Unknown at 09:20 No comments:

In the disply case

Here are a few snapshots of my display case. Very empty at the moment but not for much longer! 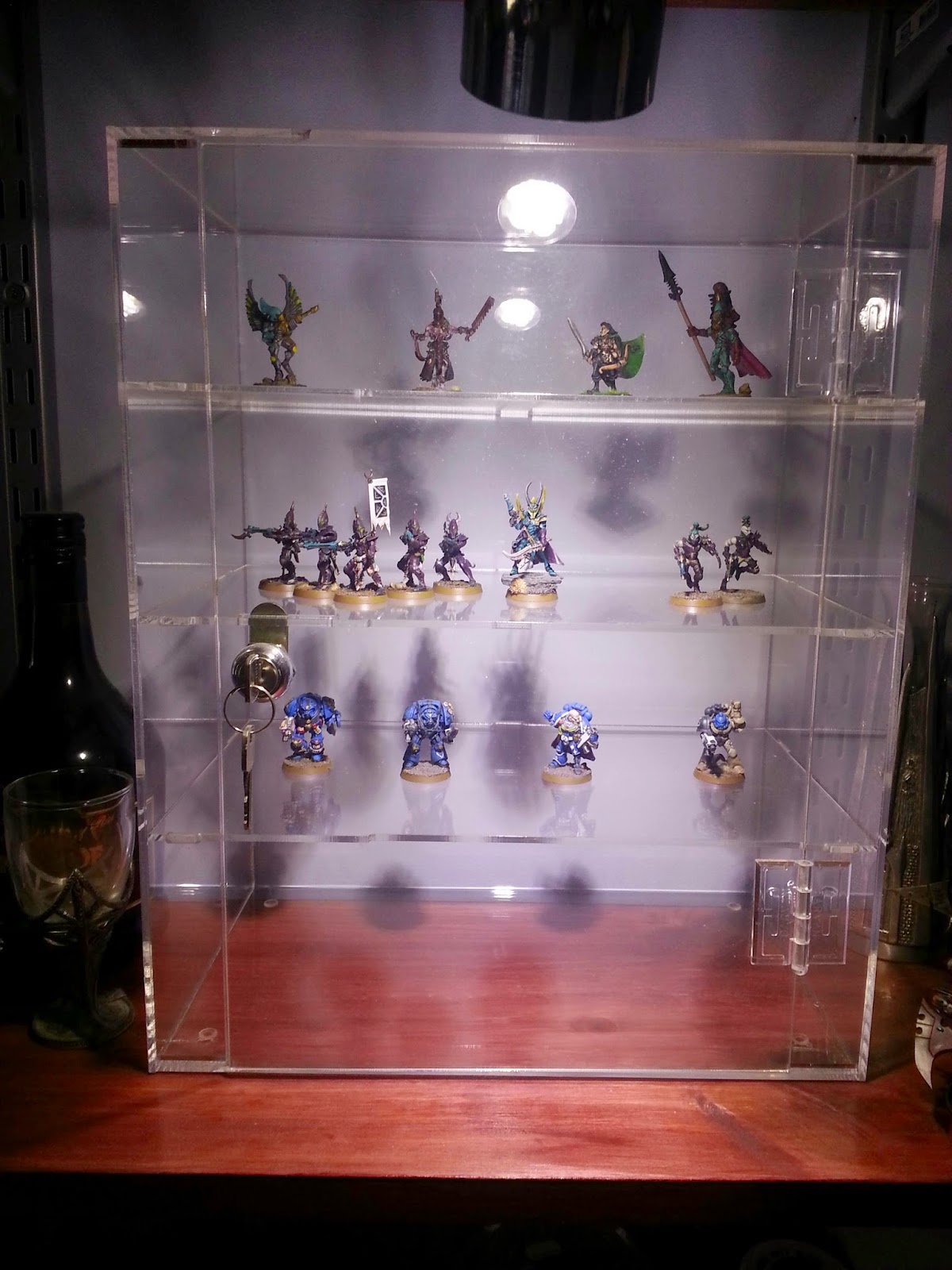 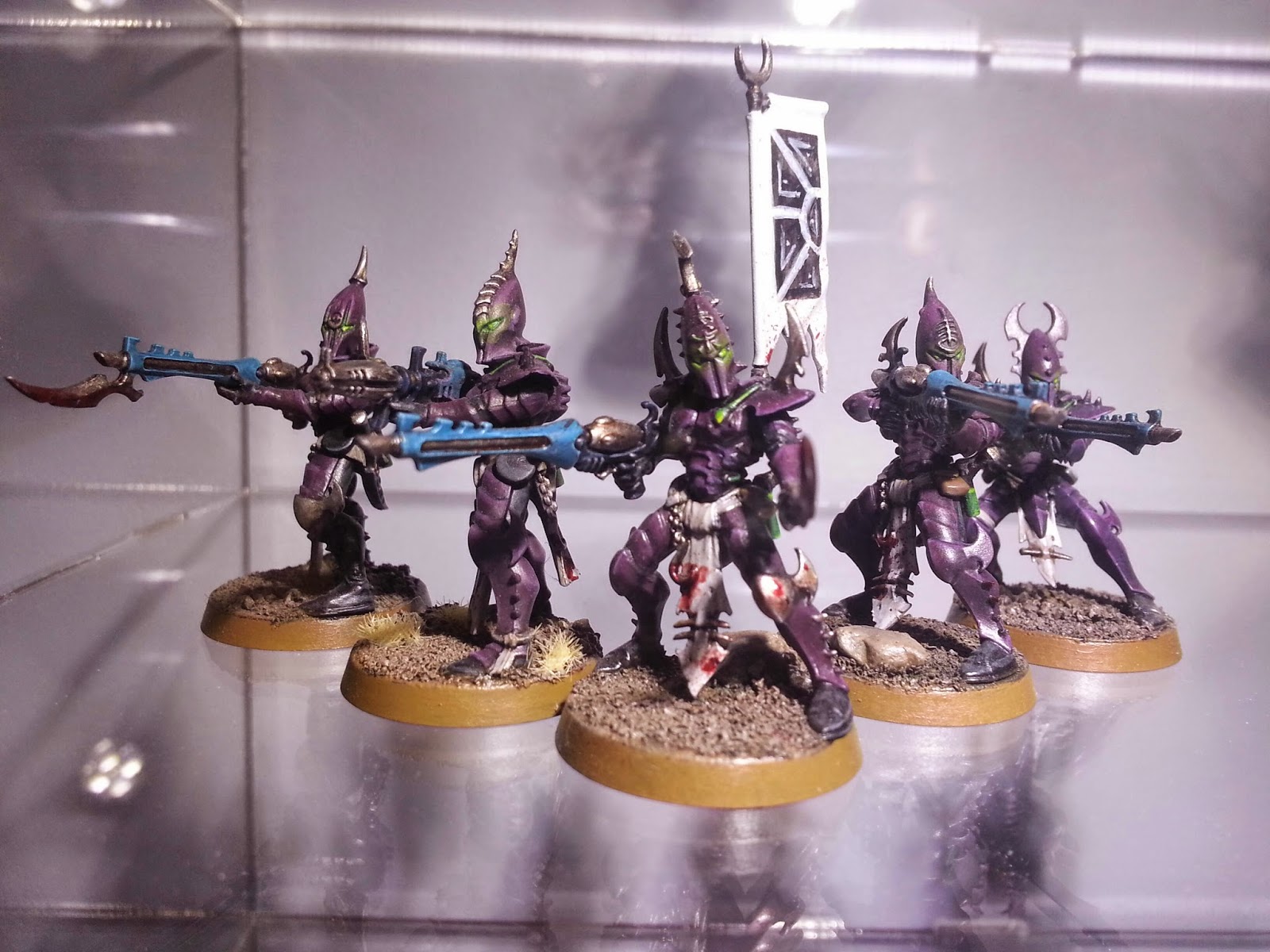 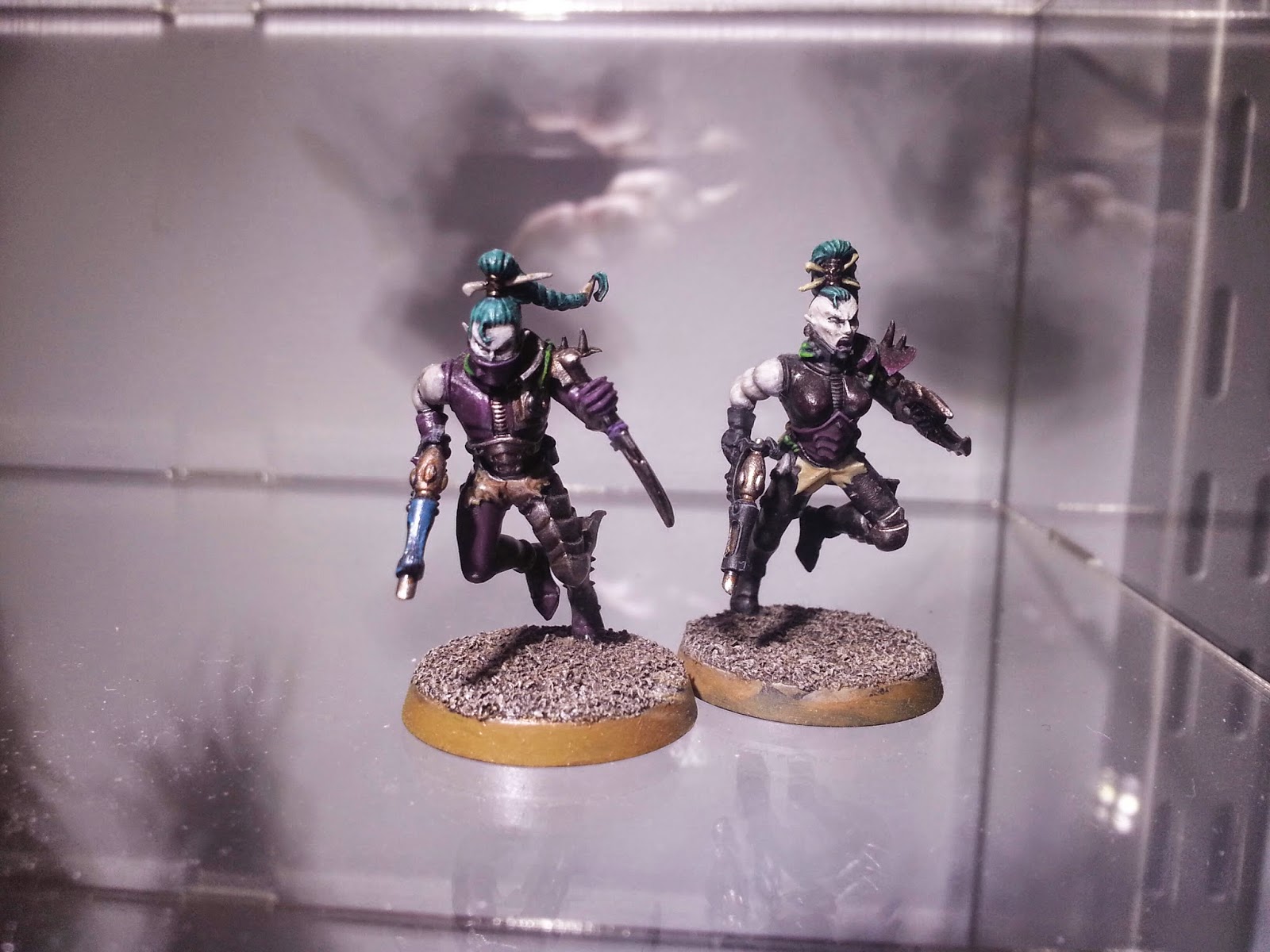 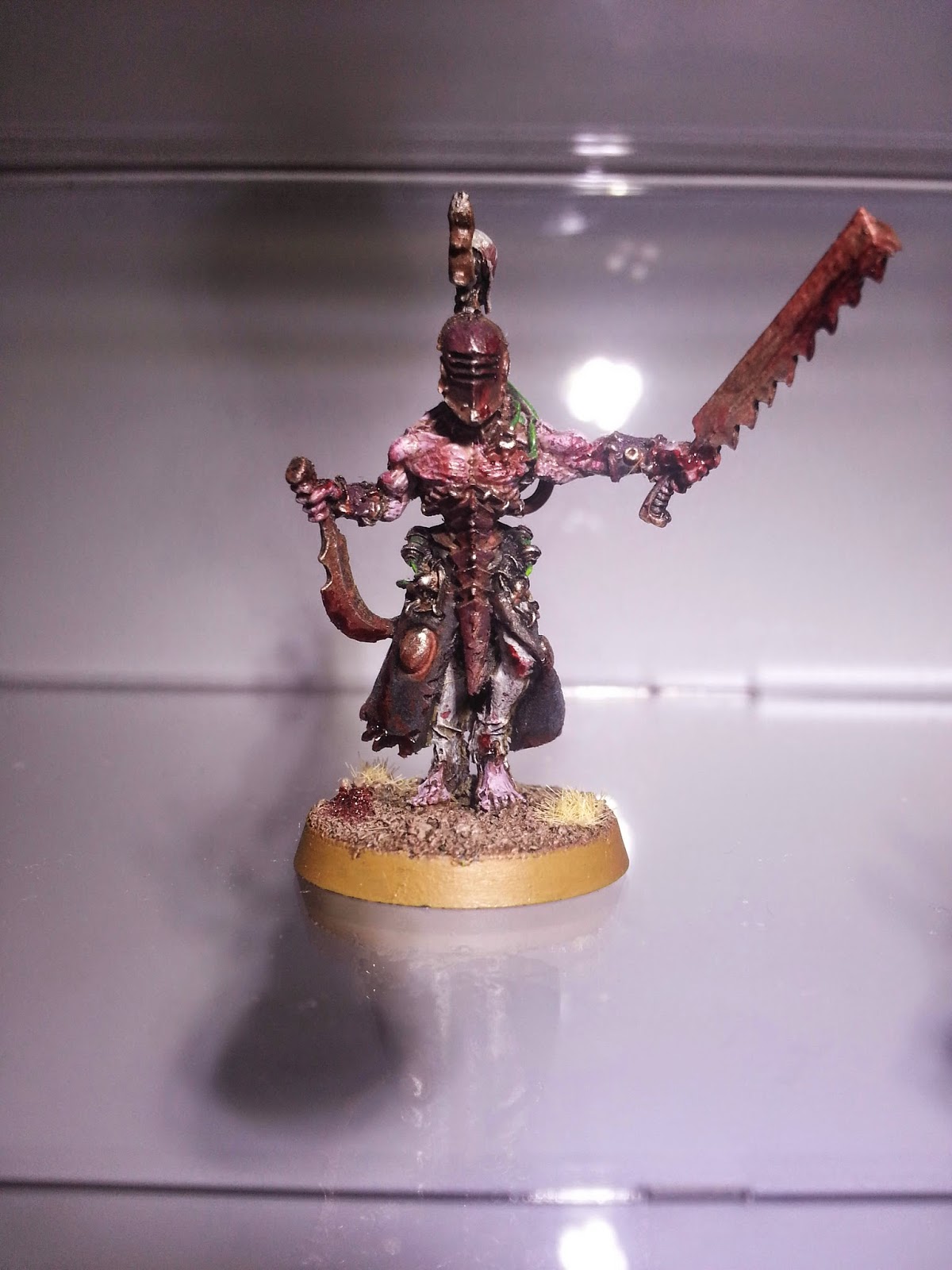